In the Yiddish (or Yinglish) idiom of the Orthodox Jews among whom I was raised, a secular Jew was frei—free. What such a Jew had been "freed" from was clear enough on both sides of that cultural and religious divide: rules about what to eat and how to dress and when a husband and wife might have sex, all the details that comprised halakhah, the "yoke of the kingdom of Heaven." In Orthodox usage, it is the confining yoke that has a positive charge, and "freedom" a negative one. This freedom is linked not with the ringing tones of liberty, autonomy, and the lifting of oppressive burdens but rather with appetite, impulse, transgression, license, and above all practices of the body.

The discourse of Orthodoxy is not, after all, so unfamiliar; it confirms the general sense—on the "secular" side—that secularization, maybe for Jews above all, liberated those who "cast off the yoke" of religion. Traditional religious practices dictated acts of the body; secularity set them free. Where tradition had married sex, within prescribed limits, secularism opened the door on other varieties, other pleasures. If this is so evident even today, long after a great-grandmother refused to cover her hair or a great-grandfather took the shears to his side locks, it is because the dramatic clash of tradition and modernity (though, of course, both of these are "modern" phenomena) is playing itself out before our eyes once again— with sex, women, and bodies (as before) — serving as the contested battleground.

In this new arena, though, the struggle between those who view religion as sexually oppressive and those who diagnose secularism as sexual license runs up against contradictory claims and phenomena: educated women proudly reject the miniskirt and "reclaim" the veil in the name of self-expression or even feminism; a variety of cultural contexts have seen the resurgence of "backward" practices under the banner of a difference sort of liberation— the resistance to globalism and the selfrighteousness of modernizers. The secularist response has been predictable: a muting of "rationalist" and feminist critique under the dictates of cultural sensitivity and in recognition of the claims of minority self-determination. But it is not only postcolonialism and postsecularism that has softened secularist critique: after Foucault, do we know any more what it means to be "free"?

Foucault's deflation of the "Victorian hypothesis," of the self-satisfied sense that moderns had liberated themselves from a previous era's sexual repressiveness, found specifically Jewish expression in the work of such theorists as Paula Hyman, David Biale, and Daniel Boyarin, who have argued strongly against viewing Jewish secularization as a form of liberation. However it may appear to traditionalists, Jewish secularism only rarely carried the banner of sexual liberty or gender equality. Jewish modernization, aside from some short-lived (if much cherished) pockets of political, cultural, and sexual radicalism, aspired not to freedom but to integration and Europeanization; modernization, then, introduced Jews to a bourgeois sexual order, which domesticated and spiritualized women and maintained even as it reshaped Jewish patriarchy.

The new secular literature of the nineteenth century ridicules every detail of the traditional marriage system, from the negotiations that preceded marriage to the hyperemotional entertainment at traditional weddings, where badkhonim performed to the copious weeping of the female guests. But sexual modernity was just as—if not more— choreographed, with carefully prescribed gender roles, rules of courtship, and models for marriage. Among the most telling literary products of the eastern European Jewish Enlightenment are the epistolary formularies by which young men and women were invited to learn the unfamiliar language of Jewish romance in the love letter, with its pre-packaged sighs bemoaning the separation from the beloved fiancée and the eager but modest protestations of erotic longing. As Foucault has argued about non-Jewish modernity, Jewish sexuality was not unleashed with secularization but rather taught a different set of tricks.

The problem, in the view of the Jewish Enlighteners, wasn't that traditional practices were sexually repressive but rather that they were hypersexual, coarse, and unnatural. For the traditional learned Jew, sex was part of the larger regulation of the body through a spectrum of laws that governed not only menstrual purity but also eating and defecation. Such matter-of-fact—and public—attention to bloodstains or positions of sexual intercourse overflowed the borders of halakhic discourse and permeated traditional Ashkenazic culture. Maskilim hoped to draw Jews away from this thinking, bringing them closer to the spiritual, restrained, and "purer" ideals of love, femininity, companionship, and marriage. Erotic freedom was thus foreign to both the traditional and bourgeois discourses that accompanied Jewish secularization. Officially, what was called for was orderly romantic, monogamous, bourgeois marriage, even if—outside the control of this elite discourse—young Jews in urban centers were falling under the sway of different ideologies or sexual ways.

If the opposition between a repressive traditional order and liberatory secularization no longer illuminates, how then do we describe what happens to Jewish sex (and gender and bodies) in secularization? On the one hand, traditional sexual practices cannot now be conceptualized through a simple model of suppression and communal control. What the maskilim characterized as the deformation of natural Eros through early arranged marriages focused only on the most visible aspect of the system—one that was also personally painful to most maskilim, who often came from the very circles in which talented young boys (as they all had been) were married off particularly young, thus rendering their late adolescent rejection of tradition a family as well as theological drama. From a Foucauldian perspective, the traditional world multiplied rather than constraining sexual relations, embedding its marriages within a dense web of religious, social, and kinship networks. By contrast, the European model bathed the heterosexual couple in an aura of spiritual romance and erotic choice, while disembedding marriage from the networks in which it had taken shape and found support. The break with religion brought not its absence but rather new forms of religion, for which sex provided both the engine and an object of veneration.

Modern Jewish literature, read so consistently as the site of Jewish Europeanization and modernization, was also the arena for the construction and inevitably the celebration of Jewish tradition. The romance so central to European culture, and the romantic attractions of Europe itself, was tempered by the internal critique and dissent indigenous to the European literary tradition, a critical tradition that was enriched by Jewish writers. Nor had the traditional world sustained a uniform approach to sex. The Bible already contained multiple sexual truths, insisting that sex was a form of knowledge, and that sex often proceeded through mistaken knowledge. The Bible tells the grandly romantic story of a man who worked seven years for the chance to marry his beloved, but doesn't fail to mention that when that wedding night finally came, he mistook her older sister for his irreplaceable love—in the dark all cats are the same, or, as Genesis 29:25 has it, "When morning came, there was Leah!" Such double wisdom emerges again in the peculiar hybridity of modern Jewish culture: Sex is the most exalted of human emotions; sex is an operation of the body, not so different from others. The greatest form of love fights against the strictures of family and society; the greatest form of love is that which holds ancestors and the Jewish people in its capacious embrace; and yet again, the greatest form of love is that which resists that suffocating story, breaking open the constraints of Jewish peoplehood through the power of erotic choice. And so on, and so forth. It was from this distinctly Jewish, impossible space that modern Jewish literature, and modern Jewish lovers, were born.

In the generations that followed the first moves toward modernization, modernist writers openly turned back to the tradition maskilim had deemed a sexual wasteland, discovering there, among other treasures, an erotics of community beyond the heterosexual couple. In Vienna, a new tractate on sexuality emerged from Freud's post-halakhic project of romantic demystification. And in America, Jewish writers directed their focus back to the body in sex, challenging the obfuscations and self-delusions of the old European romantic discourse. What had begun as the aesthetic and erotic Europeanization and Westernization of the Jews reached a very different cultural climax: the sexual thought and literary tastes of the West can hardly be conceived apart from the Jews.

As for contemporary Orthodoxy, it, too, shares in the story of modernity, arguing on modern grounds for the superiority of its sexual arrangements and the fairness of its gender roles. In Orthodox discourse, bourgeois (rather than strictly "halakhic") sexual ideologies underline the efficacy of "family purity" laws. Perhaps a line cannot so easily be drawn, then, between the neighborhood of the frum and the land of the free. The world we inhabit, whatever we wear, tells a common history, whether as "traditionalizing" resistance or already appropriated liberation. 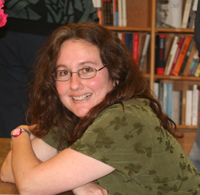 Naomi Seidman is the Koret Professor of Jewish Culture and Director of the Richard S. Dinner Center for Jewish Studies at the Graduate Theological Union in Berkeley. Her first book, A Marriage Made in Heaven: The Sexual Politics of Hebrew and Yiddish, appeared in 1997; the second, Faithful Renderings: Jewish-Christian Difference and the Politics of Translation, appeared in 2006. She has just completed a book entitled The Marriage Plot: Sexuality, Secularization and the Emergence of Modern Jewish Literature.

← PREVIOUS ARTICLE
Not in the Heavens: The Tradition of Secular Jewish Thought