As someone teaching Jewish Studies within a religion department (as well as in an interdisciplinary Jewish Studies program), I often straddle two very different academic enterprises. Religion departments, particularly Dartmouth's, stress interdisciplinary methods and welcome comparative approaches, whereas Jewish Studies departments tend to be oriented toward texts and historical method, often ignoring comparison and context and focusing instead on Jewish experience. There are strengths and weaknesses in both, and certainly important contributions could be made to each by the other.

For example, the scholarly study of religion can often become embroiled in definitions and methods that arose within a European Protestant context and that distort non-European, non-Christian religions. Ever since September 11th, scholars have revived interest in religion and their skepticism regarding secularization, and yet religion in this context is often a substitute for Christianity. It has become a cliché that secularism is the left hand of religion, "an imitation religion," as Etienne Balibar writes. Yet precisely what constitutes "religion"? Bill Brown, in a widely-praised exposé of the medieval Christian hermeneutic at the heart of Frederic Jameson's Marxist critique of postmodernism, found Dante echoed in Jameson's critique of the Bonaventure Hotel. That religion would lurk even on the Marxist left—which repudiates the smell of piety—came as a shock. Brown's study led him to ask "whether it is not so much secularism as an internalization of religion . . . that renders faith imperceptible."

Yet is this faith or is this Christianity? And is it an internalization that is at work, a triumph of religion that Brown, in surprise, has uncovered, or is it rather a supersessionism, secularism colonizing Christianity, just as the New Testament colonized the Hebrew Bible? Pervasive in the field of religion is a confusion of religion and Christianity, and far too close an alliance between Protestant interests and the scholarly study of religion. Here is one of the areas Jewish Studies might offer a corrective, in pointing out Christocentric assumptions and biases.

Within the field of Jewish Studies, the revival of interest in religion in recent years has also made an important mark, most notable perhaps in Moshe Idel's critique of Gershom Scholem's studies of mysticism. Idel insists, for example, that we cannot separate mystical texts that we read as systems of symbolic meaning from mystical figures, such as Abraham Abulafia, whom we designate as explorers of mystical experience; human experience, in its multifaceted complexity, underlies the texts as well. For the modern period, Shmuel Feiner's important reconsiderations of eighteenth-century modernization narratives, and Naomi Seidman's subtle and powerful readings of gender and sexuality in eastern European Haskalah literature are two excellent examples of the new attention to religion's role in crafting not only human agency, but also subjectivity.

In other contexts, though, the new enthusiasm for the study of religion has led in less helpful directions. A recent ethnographic study of young Hasidic girls in Boro Park, Brooklyn, for example, simply reports what the girls told the author. The girls are happy and feel engaged with modernity, we are told. The author does not probe deeper, so that the study contains nothing that falls out of accord with the subjects' own self-understanding. Yet scholarship on religion cannot simply reiterate the subjects' narrative. We might ask if everything is really so easy and cheerful in the lives of these Hasidic girls. Or did the author deliberately end her study prior to the girls' marriages in order to avoid the possibility of recording disappointment, discontent, or conflict? Where, in other words, is the problematic of the book? These girls may indeed have agency, even in the context of a social realm that affords them little autonomous choice; perhaps they are able to manipulate successfully its strictures or achieve reconciliation within its limitations. As scholars we must consider these girls' subjectivity and the limitations on their self-understanding and exploration that are imposed by religious authority. What is, indeed, the religious life, and how can scholars move beyond studies of agency to examine inner lives?

Attentiveness to how religion and the secular affect subjectivity and inner life has been brought to the fore most recently by philosopher Charles Taylor's recent book, A Secular Age, the most significant and widely discussed recent study of secularization. Taylor's striking contribution is to move our discussion of secularization away from a focus on society and ritual to examine religiosity, asking how our subjectivity has been altered in the course of what we call secularization. Indeed, Taylor's starting point is his observation that five hundred years ago, most human beings were believers, while today only a minority are. What brought about this shift? And how has it affected human experience and subjectivity?

Moving beyond the Weberian paradigm of a disenchanted world as the marker of secularization (which Weber too easily equates with modernity), and Peter Berger's claim that modernity marks the end of the "sacred canopy," Taylor asks about changes in subjectivity that arise with an end of religious belief. The shift away from the enchanted world, he argues, is not simply a matter of subtraction, the loss of certain beliefs or practices or disintegration of religious authority. Rather, the secular age sees the emergence of a "buffered self," in contrast to the "porous self" that experienced transcendence and was vulnerable to forces from outside. The buffered self is invulnerable, with a clear boundary between mind and world, mind and body so that emotional life is "an inner, mental space." Melancholy, for the secular, buffered self, is a matter of body chemistry, relief is achieved through medication, and the goal is self-awareness and selfcontrol. The buffered self is disengaged, with invulnerable boundaries that allow the self to become a master of meaning.

The paradigm of the two selves, while useful for understanding secularism's impact on the individual, is too sharply drawn, and Taylor is too sympathetic to religiosity, linking religion too closely to divine transcendence, and failing as well to distinguish religion from other forms of experience, such as the aesthetic. At the same time, Taylor's study is filled with brilliant insights into the transformations of the past five hundred years. His massive study, however, with its focus on Protestantism and European theology, fails to take Jewish experience into account and would have benefited enormously from attention to scholarship in Jewish Studies. Not once does he consider the engagement of Protestant theologians in debates over Jewish emancipation, nor the discomfort of Christians over their "discovery" of the Jewishness of the historical Jesus, nor the rise of anti-Semitism and the racialization of Christianity, nor whether European Jews experienced the same emergence of a buffered self. Similarly, he speaks generically about the human self, without consideration of race, class, or gender.

Still, Taylor's paradigms might be usefully applied to the study of Jewish experience. Much of our consideration of modernization processes focuses on changes in ritual, social assimilation, Christianization of synagogues, new philosophical and theological rationales, the emergence of historical method, as well as the development of forces of resistance that cleave ever more ardently to halakha: "Remove one brick and the entire edifice will collapse." Taylor urges us to think about changes in subjectivity and selfhood that come with the secular age, and to consider the consequences of our disengagement from our inner life that characterizes the buffered self—the sense of autonomy, an imagined conquest of fear, a commitment to self-control and selfdirection, features that have significant moral and political consequences. Studies of Judaism's modernization have examined political and economic pressures, with religion often measured in terms of ritual behavior and its abandonment, all of which are important factors; consideration of how secularization changes the self, as Taylor has suggested, adds an important dimension. 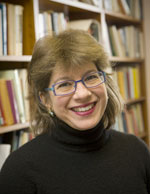 Susannah Heschel is the Eli Black Professor of Jewish Studies at Dartmouth College. Her most recent book is The Aryan Jesus: Christian Theologians and the Bible in Nazi Germany (Princeton University Press, 2008).

NEXT ARTICLE →
Archeology of the Religious Imagination