Negative stereotypes about ordinary ancient Israelite women abound in the popular imagination, as I learned repeatedly when asking my undergraduates about their images of women in the biblical period. They uttered words like "subservient," "devalued," "inferior," and even "oppressed." Scholars, especially those with literary approaches, express similar views, labeling ancient Israel "patriarchal" and assuming general male dominance. Even Tikva Frymer-Kensky z''l, well known for heralding biblical women and defending the Bible against charges of misogyny, asserted that women were dominated by their husbands. Scholars and students are alike in their perceptions that Israelite men always had power over women. They are also alike in basing their assumptions on specific biblical texts as well as overall biblical androcentrism.

But can one really make assumptions on the basis of a single kind of evidence from the biblical world? Arguably not, for biblical texts have intrinsic biases that preclude their value as a source of reliable information about the lives of ordinary women. For one thing, most biblical texts have a national purview and are not generally concerned with the daily lives of average folk; ordinary women are often background figures if they appear at all. Moreover, the biblical authors and their intended audience were virtually all male, making the Bible an unlikely source of female perspectives. In addition, the authors and their ancient audiences were largely elite men; thus biblical regulations and narratives, with their frequent attention to servants and slaves, hardly reflect the experiences of the peasant farmers of both genders who comprised the majority of the population. Finally, most authors were located in Jerusalem, a capital city that was the setting for lifeways differing in important respects from daily life in the agricultural settlements—sizeable walled towns as well as villages and farmsteads—in which most people lived. Biblical sources thus have intrinsic biases of subject matter, authorship, social class, and location.

Because of these biases, biblical texts have limited value for reconstructing the lives of ordinary women; at the very least, they must be used with considerable circumspection. Problems in relying on a single authoritative text have emerged in other fields in which information from such texts is compared to evidence from other sources. In disciplines as divergent as Assyriology, Classics, the study of Coptic Christianity, the social history of sixteenth-century Iberia, and ethnography, scholars have noted a discrepancy between information in authoritative written sources and information gleaned from other materials— including but not limited to iconography, archaeological data, epigraphic remains, direct observation (in the case of ethnography), archives, commercial records, and other nonprescriptive documents. The daily lives of ordinary women, it turns out, were rather different from the impression given by official written sources. In all these disciplines, it has become clear that attempting to draw conclusions about gendered behavior and family relationships on the basis of a limited set of texts produces flawed results.

Consideration of ancient Israelite women reveals a similar disjunction between biblical images and the social reality reconstructed using nonbiblical materials. Those materials are largely archaeological—not simply the products of field work, but also the interpretation of the published results. That is, archaeological excavations yield information about the structures, artifacts, and installations constituting the physical space in which Israelite agrarians, both male and female, lived and worked. But a household's physical features are meaningless without interpretation. The archaeological data are mute: they don't tell us who used various artifacts, for example, nor do they reveal the social and economic dynamics encoded in their use. Only by consulting ethnographic data from similar traditional societies can inferences be made about a woman's activities and their social context and meaning. This combination of archaeological evidence and ethnographic analogy is a comparativist approach that goes by various names, including gender archaeology, ethnoarchaeology, household archaeology, and feminist archaeology. Whatever the label, archaeology in the service of gender analysis is a multidisciplinary project that provides a window into gendered patterns of everyday life in premodern societies.

Identifying and interpreting the artifacts of grain production is a case in point. Grains were the mainstay of the Israelite diet, providing over 70 percent of a person's daily caloric needs. Indeed, they were so central to survival in the rather unforgiving highlands of the Land of Israel in the Iron Age that they were economic and social as well as physical substances. Women not only participated in harvesting wheat and barley but also carried out the numerous subsequent steps, which took as much as two to three hours a day, necessary for converting grains into edible form. The role of women in performing this vital subsistence task (and many others—such as producing other foodstuffs, household textiles, and various utilitarian objects and installations) would have been highly valued. It was also the source of considerable household power in a society that lacked a market economy, except perhaps in several urban centers in the late monarchic period. Moreover, the power that accrued to women by virtue of their role in converting raw materials into edible (or wearable or usable form) complemented the power accrued to men as the producers of those raw materials. Moreover, female power was probably augmented by the social knowledge of women, whose tasks were often done in the company of women from neighboring households. These interactions not only relieved the tedium of their daily tasks but also gave them information that contributed to the welfare of household units. That is, they would know if someone were injured or ill and unable to carry out essential tasks; they could then arrange for assistance. In a world without government-sponsored social services, the informal networks formed by women working together formed a vital mutual aid society.

Other women's roles can be reconstructed by identifying and interpreting other kinds of objects and installations, including the artifacts of the household religious activities that were the primary and most common aspects of the religious lives of most people. Women surely had significant roles in preparing household celebrations of monthly and seasonal agricultural festivals. They were also largely responsible for other activities that we might not consider religious—such as caring for the sick and injured, protecting pregnant women and newborns from evil spirits, lamenting the dead, and even guarding bread dough from contamination by malevolent forces—but which had ritual components imbued with sacral meaning. These ritual procedures, many concerned with life-and-death matters, were believed to be essential for the well-being of the members of a woman's household. Women were thus ritual experts in household life no less than priests were at communal shrines. Their lives were surely enriched by this dimension of household life in ways that perhaps compensated for the drudgery and tedium that characterized daily existence.

The complementary nature of female and male contributions to maintaining Israelite households meant a balance of power, at least between the roles of the senior female and male in the multigenerational family groups living and working in most Israelite households. The senior woman was responsible not only for an array of tasks and activities but also for organizing the tasks and activities of others, allocating resources, and determining the use of household space. In this way she would have exercised authority over both young and adult children, the wives of male offspring, and even in certain circumstances the senior male. To be sure, the situation was hardly one of gender equality in every aspect of household or community life; but the notion, derived from texts, of pervasive female subservience flies in the face of what can be gleaned from gender archaeology about a balance of gendered power in many areas of daily life. This information may even call into question the appropriateness of the "patriarchy" label. At the very least, it allows us to bring ordinary Israelite women into the foreground and acknowledge the disconnect between text and social reality. 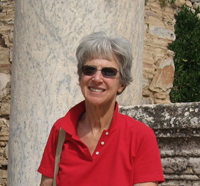 Carol Meyers is the Mary Grace Wilson Professor of Religion at Duke University. She has lectured and published widely in several fields: biblical studies, archaeology, and gender in the biblical world. A prolific scholar, she is the author of over 450 articles, reports, and reviews; and she has authored, co-authored, or edited twenty books. Her latest book, Rediscovering Eve: Ancient Israelite Women in Context (2013), is a landmark study of women in ancient Israelite society. And her reference book, Women in Scripture (2000), is the most comprehensive study ever made of biblical women. Other recent books include Exodus (2005), Households and Holiness: The Religious Culture of Israelite Women (2005), and (with Eric Meyers) Excavations at Ancient Nabratein (2009). Meyers has been a staff member or co-Director of numerous archaeological field projects in Israel. She has also been a frequent consultant for media productions, including DreamWorks’s Prince of Egypt and Nova’s The Bible’s Buried Secrets.

Meyers recently served as President of the Society of Biblical Literature. She is a trustee of the American Schools of Oriental Research and its Jerusalem affiliate, the Albright Institute of Archaeological Research and is a member of the Board of Directors of the Dead Sea Scrolls Foundation. She has served on the editorial boards of many reference works and journals and was a senior editor of the Oxford Encyclopedia of Archaeology in the Near East and a consulting editor for both The Contemporary Torah and The Torah: A Woman’s Commentary.

NEXT ARTICLE →
Marxism and the Bible