The Second World War precipitated an ideological-political crisis among Marxists in the United States. Prior to the war, Marxian intellectuals struggled to explain the rise of Hitler and Stalin within an established ideological framework.

But Germany’s invasion of Poland, the systematic killing of Jews that followed, and the Soviet invasion of Finland forced a reconsideration and, in most instances, aban-donment of Marxism, particularly by those independent of and, indeed, hostile to the Communist Party. Could anything be salvaged from the socialist tradition?

For intellectuals of Jewish background, the flight from Marxism entailed a new engagement with things Jewish. Subjects pre-viously considered parochial or irrelevant—anti-Semitism, Judaism, Yiddish literature, Zionism—now commanded attention. This Jewish turn continued a historical pattern among left-wing intellectuals. Since the nine-teenth century, repeated crises, such as, the pogrom wave of 1881–82, the Dreyfus Affair, and the Kishinev pogrom, produced dramatic reconsiderations of “the Jewish Question.” And so it happened with American-born (or—raised) Jewish intellectuals in the 1940s. They reached no shared conclusions, but their forays produced a rich outpouring of writing on Jews, socialism, and the relationship between the two.

Enter Will Herberg. Although best remembered for his influential study of religion in postwar America, Protestant-Catholic-Jew (1955), Herberg occupied an important place in the history of American socialism. Between the two world wars, he earned respect as a bold, wide-ranging thinker, who tackled areas of knowledge (Freudian psychoanalysis, Einstein’s theory of relativity) most other Marxists either avoided or dismissed. He belonged to a group of Marxist-Leninists referred to informally as the Lovestonites, after its leader Jay Lovestone. The Lovestonites were expelled from the Communist Party in 1929 for adhering to the idea that capitalism evolved differently within different countries, which meant, in practical terms, that Communists should enact policies appropriate to American conditions, rather than automatically imitate those of Russian Communists. For that heresy, Josef Stalin labeled Lovestone and his followers “American exceptionalists” and ordered their expulsion from the Communist Party. The Lovestonites established a rival communist organization, which published an interesting newspaper, edited by Herberg, and exerted considerable influence within the (predominantly Jewish) International Ladies’ Garment Workers’ Union (ILGWU). Herberg himself served as educational director of one of the union’s largest locals. By the end of the 1930s, however, Herberg and most of his colleagues lost faith in Marxism. They voted to disband their organization in 1941 and went separate ways.

Herberg discovered religion. He started reading the Protestant theologian, Reinhold Niebuhr, and the Russian Orthodox philosopher, Nikolai Berdyaev. For a time, he considered conversion to Christianity, until Niebuhr dissuaded him. Herberg enrolled in the Jewish Theological Seminary and found his way to the writings of Martin Buber and Franz Rosenzweig. All the while, Herberg associated with Niehbuhr’s Fellowship of Christian Socialists and contributed to its journal, Christianity and Society. Drawing from these various sources, Herberg formulated a theologically grounded socialism that was anti-utopian yet committed to the pursuit of social equality, protective of individual autonomy yet true to “authentic Jewish tradition.”

The central problem Herberg set out to address was totalitarianism, which he defined as an all-encompassing political and cultural regime that denies “the autonomous reality of society as against the state and therefore denies all the more the autonomy of the individual as against either society or the state.” Totalitarianism reached monstrous forms in Nazi Germany and Stalinist Russia, but its seeds, Herberg contended, could be found in nearly all modern institutions: corporations, government agencies, trade unions, anywhere potentially. All collective endeavors contained an inherent tendency toward totalitarianism. This caused an acute dilemma—a crisis, really—for democratic socialists. Socialists needed to mobilize large numbers of people to create effective organizations capable of attaining economic and political power. Yet, in doing so, socialists risked betraying their original, emancipatory purpose. “Organization,” Herberg observed in 1944, “makes for bureaucracy; discipline for authoritarianism; solidarity for the submergence of the individual in the mass—in every case the tendency runs counter to the goals that socialism sets out to achieve.”

Trade unions exemplified the problem. To be sure, Herberg, still in the employ of the ILGWU, remained committed to organized labor. As late as 1949, Herberg called for the creation of a national labor party, despite a growing conservative shift in American politics. And, during the Korean War, with McCarthyism in full swing, he defended labor’s right to strike, even against the federal government. Herberg regarded labor a crucial mechanism “in the struggle for democracy and social justice.” All the same, Herberg found much wanting in the labor movement. Bureaucratization, “lust for power,” and apathy among rank and file members plagued trade unions. As they grew in size and strength, their original idealistic and democratic energies gave way to ossification and corruption. Herberg posited this moral decline as a veritable law of labor history.

Herberg called for a new “powerful social idealism” and “moral dynamic” that could check “the crudities of personal ambition and power politics.” But what source could sustain such new idealism? In the past, Marxism functioned as the “conscience” of the labor movement, but it proved a failure. The tragedy of Marxism was that it worked against its own humanistic, libertarian impulses and emancipatory goals. On the one hand, Marx criticized the degradation of the individual under capitalism, the transformation of humans into mere instruments of industrial production and market exchange. On the other, Marx’s materialist conception of history denied transcendent morality, and thus opened the door to terrible oppression. Marxism actually upheld an unacknowledged morality, a morality of power that considered anything that advanced the class struggle to be just, as determined and verified by the dialectical movement of history. As Herberg wrote in 1947:

Thus Marxists came to reify the collective—the working class, the workers’ party, the workers’ state—at the expense of the individual, and thereby contributed to the rise of totalitarianism. What, then, could replace Marxism? Where was the moral force, capable of improving organized labor and society generally? Herberg found the answer in Judaism.

Judaism, according to Herberg, made possible “a mature and effective social radicalism.” The key word was “mature.” Judaism contained a “passion for social justice” forcefully displayed by the Prophets. “No modern attack upon economic exploitation,” Herberg marveled, “can equal in earnestness and power the denunciations of the Prophets against those who ‘grind down the faces of the poor.’” At the same time, Herberg believed the prophets’ passion for justice was restrained by God’s ultimate authority. Worship of an all-powerful God curbs “arrogance and exorbitant pretensions of men and institutions.” Furthermore, the scriptural relationship of “man” to God lays the basis for mutual respect between individuals, necessary for social solidarity and democracy. To believe that God created man in his image is to respect the dignity and value of human life. Judaism, by its very nature, was antitotalitarian. It doesn’t disavow the need for power, Herberg added. Judaism understands the need for a worldly authority to keep in check man’s evil inclinations that would otherwise threaten individuals and society. Judaism thus recognizes power as both a necessity and a “corrupting influence.” This ambivalent conception of power combined with passion for social justice and recognition of human dignity as derived from an all-powerful God, makes possible a restrained socialist politics, a socialism of limits.

Herberg named this politics “personalist socialism.” Similar to the early, libertarian strains in Marxism, personalist socialism, as put forward by Herberg, opposed capitalism, not because it was excessively individualistic, but because it paid lip service to individualism while, in fact, degrading the individual. Herberg imagined that personalist socialism would “lead to a higher and more complete individualism.” He failed to describe in any detail the necessary economic arrangements, but he spoke of a pluralistic economy consisting of publicly and quasi-publicly owned enterprises existing alongside privately owned businesses—a mixed economy presumably along the lines of postwar European social democracy.

Herberg failed to convince other erstwhile Marxists, who mostly continued to reject God, even as they grappled with what it meant to be a Jew. Why wasn’t a liberal constitutional government sufficient to prevent totalitarianism and abuses of power? Hadn’t religion caused tremendous suffering and persecutions throughout history? Herberg brushed over such questions all too lightly. For his part, Herberg eventually lost conviction in socialism altogether. In a 1954 essay on the Socialist Party leader, Norman Thomas, he declared socialism dead, irrelevant to a society of ever-growing prosperity and political consensus. He proposed in its place “social idealism,” an admittedly vague notion, but one characterized by “burning indignation against social injustice; impatience with compromise and expediency . . . ; a high sense of the human worth of productive labor and of the dignity of the producing classes in society; a conviction that the welfare of the masses is a prime social responsibility; above all, the vision of the ‘cooperative society,’ of a ‘truly just social order,’ in which men will live by their own work in freedom, peace, and brotherhood.” In this rhetorical flourish, Herberg’s social idealism did not sound much different from socialism. But by the end of the decade Herberg settled into political conservatism in the spirit of Edmund Burke. He now stressed the need to preserve “historical stabilities and continuities” and, in a particularly low moment, faulted Martin Luther King for disrupting both. Nonetheless, the dozen or so years Herberg spent formulating a Judaic basis for socialism may be viewed as a distinct and creative period in Herberg’s intellectual biography, and an important part of the larger history of American Jewish intellectuals as they confronted the horrors of the twentieth century. 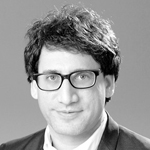 Tony Michels is the George L. Mosse Associate Professor of American Jewish History at the University of Wisconsin-Madison. He is the editor of Jewish Radicals: A Documentary History (New York University Press, 2012).

NEXT ARTICLE →
A Party of Naysayers: The Jewish Labor Bund after the Holocaust

← PREVIOUS ARTICLE
A Tale of Two Buildings: Sender Jarmulowsky's Bank, the Forward Building, and the Jewish Encounter with American Capitalism