Daniel Smith, in his recent book Monkey Mind: A Memoir of Anxiety (2013), has brought the topic of Jews and anxiety to the fore. He argues that Jews are predisposed to anxiety because the experience of anxiety is close to the Jewish tradition of disputation argumentation and of looking at things from every angle. In other words, Jews think too much! Smith adds that anxiety is also the result of many years of experience with oppression, persecution, and threats. While I generally agree with Smith's views, I am interested in the question of when Jewish anxiety began to rear its head. It is my sense that anxiety was a key component of early emerging Judaism, which preceded both the development of Jewish textual traditions and a long history of persecution.

Assuming that the majority of biblical texts were edited and given a final form during the period of the Exile in Babylonia, the earliest Jewish communities developed a core identity inextricably bound up with trauma and disaster. A key site for the construction of these trauma narratives can be found in those prophets who lived around the time of the destruction. The book of Ezekiel provides an excellent example of identity formation with trauma at its core.

For decades, trauma was understood through the lens of individual psychology. In more recent years, thinkers have suggested that trauma also operates on the communal level and that trauma is not an event but rather a socially conditioned response to an event that can never be fully understood. Jeffrey Alexander, in Trauma: A Social Theory, argues that collective traumas are neither about what "really happened" nor about the level of actual suffering; rather, they are culturally constructed interpretations and reimaginings of events. There can be conditions in which the majority of a community suffer physically or emotionally, but that does not automatically make the situation a communal trauma. Furthermore, events may take place that do not impact the majority in a community, but a narrative can be constructed that impacts on the communal identity of all its members. Alexander describes the necessary elements in the cultural construction of trauma. There must be a carrier group to create and communicate the story; an audience that buys into the narrative; and a particular historical and cultural environment within which the performance unfolds. Additionally, the trauma narrative needs to serve a purpose.

Within this model, we can consider some of the latter prophets and then Ezra as the carrier group that told stories and performed within their environment. The particular historical and cultural environment was one of rapid change, great loss and dislocation, and exposure to very different worlds. In 597 BCE, Nebuchadnezzar exiled the recently enthroned King Jechoiachin, members of the royal court, and other leaders of the community (including the prophet Ezekiel). In 588 BCE, less than a decade later, the puppet king Zedekiah's revolt against Babylonian hegemony ushered in the Babylonian army and a two-year siege. In 586 BCE, the city was breached, the Temple and much of Jerusalem was burned to the ground, and there was a second deportation.

Conditions for the population that remained in the land of Judah are uncertain. Politically, the nation of Judah was at an end and the future of the Davidic line was precarious at best. Socioeconomic information is scant; the biblical record would have us believe that Jerusalem and other Judean towns were razed to the ground.

However, the minority of the deported population may have experienced the greatest sense of dislocation and loss. Devastation likely affected more than political and socio- economic institutions. The experiences of deportation had an impact upon interpersonal dynamics, self-identity, and a host of other aspects of culture.

Some scholars believe that the biblical texts greatly exaggerate the impact of the Babylonian invasion and that events may not have been as traumatic as widely believed. The truth is that regardless of the historicity of this event—what conditions were like for the first-generation Judeans in Babylonia, what conditions were like for people who remained in the vicinity of Judah after the destruction of Jerusalem—we do know that something about this event branded the identities of those Judeans and early Jews. While history is unclear, the constructed memories of those events are revealed through biblical literature. The community's subjective memories helped to constitute the narrative.

An important author/performer who helped to shape identity through a trauma narrative was Ezekiel. Building upon a trope that other prophets had developed, he sent out the message that when the community develops political alliances with Others or engages in any socioeconomic intercourse with Others, God gets enraged and punishes the people through violent means. Ezekiel's language is strong and violent as he presents God's voice:

My anger will be spent and I will vent my fury upon them and I will be comforted. Then they will know that I, YHVH, have spoken in my jealousy when I vent my fury upon them. I will make you into a ruin and a disgrace among the nations that are around you, before the eyes of every passerby. You will be a reproach and a taunt, a warning and a horror to the nations all around you when I execute judgments against you in anger and fury, with raging rebukes—I, YHVH have spoken. (Ezekiel 5:13–15)

Ezekiel uses similarly horrific imagery throughout the book, especially in chapters 16 and 23, where alliances with other nations are communicated through the metaphor of marital infidelity and punishment is described metaphorically as rape and mutilation. The lasting message for the community that accepts this narrative is that it is perilous to interact with outsiders and that the result of such behavior can be catastrophic.

Another component of the trauma narrative is that the community is in an unending intimate covenant with a God who has absolute control over the relationship. The covenant with God is a mixed blessing. On the one hand, the people do not believe that they are subject to the random whims of the gods; the covenantal relationship provides a framework for meaning. However, as the covenantal partner who has no power in the relationship, who can never escape God's wrath, the community imbibes an ongoing identity of powerlessness, inadequacy, and even shame. Ezekiel's self-humiliating performances and muteness attest to the utter control that God commands over him. Even Ezekiel's prophecy regarding the return of the people to Jerusalem is set in a negative tone. Ezekiel's God promises to bring the people back from exile in order to save God's own reputation. He repeats over and over again, "not for your sake do I act!"

The prophet's narrative defines the traumatic event in such a way that makes sense of the event and helps to strengthen group identity. Ezekiel understands the event as a divine response to the community's behavior and not as a random act or bad luck. The community is bound together by a God who has not abandoned them and who still pays attention—even if the results of God's attentions are devastating. Ironically, while the story is successful in identity formation and group bonding, this particular narrative also embeds collective anxiety into Jewish consciousness. It ritualizes the "event" without any assurance that history will not repeat itself. The collective anxiety about Israel's place in the larger community of humanity and the unease about being forever bound with a God who can wreak havoc serves to keep the people together under a shared anxiety. The impact of exilic and postexilic literature is that the early Jewish community knows who it is, but also lives in a state of constant anxiety, worrying about maintaining a distinctly separate identity and wondering when the next disaster will occur.

This prophetic narrative of trauma sets the stage for ongoing trauma that is sometimes real and sometimes imagined. The message of deserved suffering, an inextricable link with a jealous God who does not tolerate relationships with others, and a feeling of powerlessness and lack of agency have been significant contributing factors to Jewish anxiety and general unease, especially as Jews find themselves living in an increasingly multicultural world. 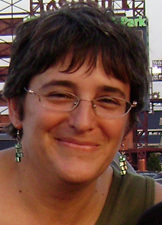 Tamar Kamionkowski is professor of biblical studies and the former dean at the Reconstructionist Rabbinical College. Tamar Kamionkowski holds a bachelor of arts degree from Oberlin College, a master of theological studies from Harvard Divinity School and a doctorate in Near Eastern and Judaic studies from Brandeis University. Kamionkowski is the author of Gender Reversal and Cosmic Chaos: Studies in the Book of Ezekiel (Sheffield Academic Press, 2003) co-editor of Bodies, Embodiment and Theology of the Hebrew Scriptures (T&T Clark, 2010) and the author of numerous articles on biblical literature. She is currently working on a commentary on the Book of Leviticus for the Wisdom Commentary Series. Her research interests include Jewish biblical theology, prophetic literature, ancient Near Eastern mythology and gender studies.